A tough opening round at Culham in March challenged the riders within the Maxxis ACU British Motocross Championship due to overnight rain; however Lyng in April would end up being the total opposite. As the championship moved to Norfolk for round two of the 2017 season Norfolk was basking in the full sunshine and temperatures was sky high. The sandy nature of the Lyng circuit is normally a challenge at the best of times but with high temperatures and riders tackling two twenty-five minute races, it was certainly going to be a test of skill and fitness. 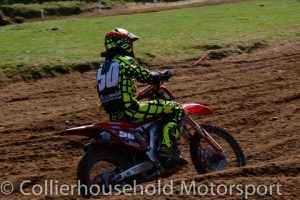 Coming into round two off the back of an unbeatable opening round in the MX2 class was the Hitachi KTM UK machine of No.919 Ben Watson and he would be carrying the red plate for this meeting after opening his season in the best possible way.  With the top three leading MX2 contenders from 2016 moved on in 2017 (Adam Sterry, Steven Clarke and Bryan MacKenzie) this had opened the class up to a number of riders as contenders for the title, with Martin Barr looking as the most likely candidate after finishing fourth overall in 2016. With Watson returning to the series after a year out in 2016 he was quick out of the gate at Culham, however Barr was extremely quick on the Buildbase Honda, going well in both Motos, especially race two when he ended up second to Watson. The main threat to Watson though coming into Lyng was the “Flying Finn” Harri Kullas, on the MVR-D Route 77 Husqvarna. Kullas is challenging himself in 2017 by competing in both MX1 and MX2 of the British Championship and at Culham started his season with a second and an eighth, lying second in the championship on 35 points. Whilst Kullas was a threat to Watson on-board a Husqvarna, another rider going for Gold with the same manufacture was Mel

Pocock. After suffering a career threating injury at the start of the 2015 season, Mel was now back to full fitness and looking strong on the REVO Husqvarna. Since joining the team in 2017, Mel has recorded strong results and is considered a title contender, especially after taking overall victory ahead of Lyng within the MX Nationals Championships. Mel lied fifth in the standings behind Martin Barr after Culham and good things from Pocock were expected in Norfolk. The surprise rider maybe within the top five of the championship approaching Lyng after securing his debut podium at Culham was Brad Todd, on the Putoline Planet Suspension Husqvarna. Coming through the ranks over the last few years, Brad now looked like a threat to the more experienced front runners, throwing the championship wide open. Brad secured 32 points at Culham and lied third the standings, only three points off of Kullas in second. 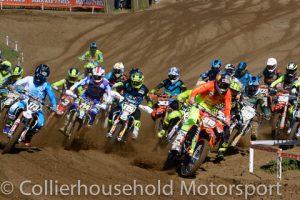 The opening moto of the day was race one for the MX2 class and with conditions perfect, the riders were raring to go at the gate. With focus on Ben Watson and whether he could get the holeshot, riders like Harri Kullas and Martin Barr were hoping to ruin Watson’s day, which had started brilliantly with the quickest time by over a second in qualifying. When the gate dropped, Watson start was like lightening and the Hitachi KTM UK broke away into an early lead, closely followed by Martin Barr on the Buildbase Honda. As track conditions became harder, Watson lead decreased but it was Barr who struggled the most, taking a small tumble and handing second to Harri Kullas, luckily remounting to keep Mel Pocock back in fourth and keep a train of Husqvarnas behind. As Kullas moved into second, the MVR-D Route 77 Husqvarna was flying and the Finn closed down Watson within a few laps. Seeming to ride smoother than Watson, Kullas took the lead away from KTM rider and once ahead, continued to push. Watson had no response to the challenge of Kullas and had to settle for second in the end by 1.044s after 25 minutes plus two laps.

As Martin Barr came home in third on the Honda, the tumble had affected his pace, especially as Barr was riding with a shoulder injury and he ended up 24.894s back to the race winner. The pace of Barr though with the injury was impressive and the Honda rider ended up comfortably in third after the REVO Husqvarna of Mel Pocock couldn’t close the gap and came home fourth, ahead of another strong ride from Brad Todd on the (Putoline Planet Suspension Husqvarna) and local rider Lewis Tombs on the (Lings Husqvarna). In what was a more closer battle on track, Josh Gilbert on the DTHORC Honda split a line of Husqvarnas to come home seventh after holding off Todd Kellett (St Blazey MX Husqvarna), who himself had to be cautious of Geartech Husqvarna rider Luke Norris who ended ninth whilst Jordan Divall completed the top ten for Evotech KTM.

Kullas Completes the Double at Lyng 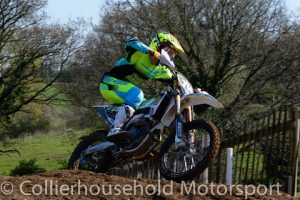 The second Moto got underway under the mid-day Sun and with Harri Kullas doubling up at Lyng by riding in MX1, it was going to be interesting to see how quick the Finn and what strength he had to challenge Watson for another win. When the gate dropped, Watson looked in the zone, grabbing the holeshot and racing away, ahead of a fast starting Brad Todd and Kullas back in third. As Watson looked set on pulling away, a battle was on for second and it was Kullas pushing. As Todd put up a fight defending, it wasn’t long before the Husqvarna in second wasn’t the Putoline one of Todd and instead the MVR-D Route 77 of Kullas. Once ahead Kullas chased down Watson and his task was made easier, when a slight error from the Hitachi KTM rider put Watson down and Kullas was away out front. 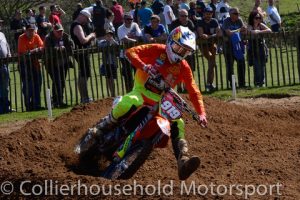 Once Todd was removed from second, the Putoline Husqvarna rider unfortunately lost out to those behind, as Martin Barr (Buildbase Honda) and Mel Pocock (REVO Husqvarna) dropped him to fifth, as the front five gapped the rest of the field on a track which was becoming harder to ride as laps went on. The battle for third intensified in the later stages as Pocock chased down Barr, piling the pressure and finally securing third from the Honda rider. The pass on Barr was crucial points gained for Pocock and would secure him an overall podium of third in his fight for the overall MX2 title. After nearly having his career ended at the beginning of 2015, it was great to see Pocock back to full fitness and challenging for podiums. It shouldn’t be long in 2017 for the REVO Husqvarna to be on the top step in the Maxxis ACU British Motocross Championship. 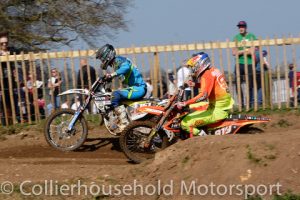 Back at the front Harri Kullas looked in control however in the final stages, a 110% effort from Ben Watson after his fall resulted in the two going handlebar to handlebar around the Cadders Hill circuit. With both jumping side by side and corning wheel to wheel, Watson challenged Kullas right to the final lap, until the Finn held on by 1.703s to record the double at Lyng and boost his championship challenge. The third round of the series will take place at Canada Heights on the 30th April and as the series moves to Kent, Watson holds onto the series lead by nine points with Kullas in second on 85 points. Third place is tied between Martin Barr and Mel Pocock as both sit on 67 points, 3 ahead of Brad Todd in fifth, after the Putoline Husqvarna rider recorded fifth again at Lyng. It was behind Todd in race two were a battle was on between five riders, as Lewis Tombs lead a mini train to come home sixth for the second time, ahead of Jordan Divall (Evotech KTM), Todd Kellett (St Blazey MX Husqvarna), Liam Knight (Hobbs Racing Kawasaki) in ninth and Belgian MX2 Champion Kevin Woutts completing the top ten for the Lombard Express Suzuki team.

For more photos from the MX2 Championship at Lyng, please click here and for more information on the championship, please visit http://www.mxgb.co.uk/

Witten and Produced by Chris Collier and Cheryl Closs